Our 6th Gen Bronco Rear Shock Skids were designed to protect the rear shocks from damage on the trail. The lower shock bolts, lower links & link mounts are susceptible to damage from striking large rocks or other obstacles when driving off-road. Our Shock Guards shield these components from contact with objects passing beneath your Bronco.

These skids are located on the lowest part of the rear axle, which helps you to slide right off of obstacles beneath you. Both the shock & link mount skids are a single piece, rather than separate skids, and tying them together improves their strength.

For full, rear undercarriage protection add our Bronco Rear Diff Skid Plate to your order to complete the build.

We are confident in our products and that they will satisfy your needs, however we realize that there are cases where a product may arrive damaged or defective. Our goal is for our customers to be happy. If you are not satisfied with your purchase of one of our products we will assist you in getting refunded* or exchanged for another product.

Everything ships free in the Continental US! **With the exception of Hard Tops & JL Hoods.

We offer a 1 year limited warranty from the time of purchase.

DESIGNED IN THE USA

All of our parts are CAD designed and tested in the USA to ensure the highest of quality.

All of our products ship within 2 business days. If we happen to be out of stock, a sales associate will contact you directly.

We ship from our headquarters in Riverside, CA.

We currently ship only to Canada & US Territories. If you live in a different country, consider using an international courier service.

DV8 Off Road warrants all parts of its manufacture, furnished under this agreement, to be free from defects in workmanship and material for a period of ONE YEAR from the date of purchase. This limited warranty covers the cost of the product.

We accept returns on damaged items with a valid Return Authorization Number or a RMA number. We will refund the full amount minus the shipping costs for the return and a 25% restocking fee.

In the event that your order arrives damaged in any way, please email us as soon as possible (within 24 hours of the receipt of the shipment) at orders@dv8offroad.com with your order number and a photo of the item's condition. We address these on a case-by-case basis but will try our best to work towards a satisfactory solution.

If you have any further questions, please don't hesitate to contact us at orders@dv8offroad.com.

Of course we do! In order to receive the discount click here . I figured out the install and got them on fine, good tips in the other review. I just want to say how great these are in action! Went on a pretty technical trail with my local Bronco Group, (DV8 products on most rigs by the way), there was lots and lots of underside scraping going on! All the rigs drove home under their own power. Here is a picture showing how glad I am to have DVD protection on my 22 Badlands Sasquatch. I am Definitely a fan. 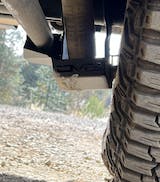 I just finished installing both the shock & differential bash plates on my 2022 Outer Banks SAS Bronco. Firstly, they look GREAT! But, I have a few installation comments for DV8 and others to consider. No, it's not that hard to get them on but it took longer than their instructions lead you to believe unless you have the following info. So, here are my observations.
Shock plates:
Assuming you don't have a hoist, as my driveway doesn't have, make sure you have a jack to raise the body up to unload the spring tension from the lower shock bracket. Otherwise, you will not get the bolt to move toward the tire when loosened to get the bash plate installed. BTW, 330 ft-lbs. of torque is a TON. Have a cheater bar for your breaker bar or a 2' breaker bar as I have, especially if you don't have a large impact driver.
Use a dead blow hammer or a bronze hammer to get the bolt to move toward the tire to get the gap needed. A rubber mallet just didn't do it. I also need a C-clamp to close the bracket back up as it sprung open slightly once I got the bolt loose making it even harder to move. You'll also need the hammer to move the bolt on the lower trailing arm. Make sure to move the nut all the way flush with the end of the bolt before hitting it so you don't bugger up the threads.
Otherwise, the installation went smoothly on the 2nd one as I spent all my time trying to figure out the above on the 1st one.
One additional note, I chose these because they not only protect the rear of the shock mount, which is helpful when backing up, which many others don't but they also protect the lower trailing arm attachment point. 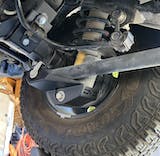