The OE Plus Series Side Steps for the 2021+ Ford Bronco were designed to offer an easier step up into your cab and provide light protection on the trail. These are perfect for those who will be running their Bronco as a daily driver, especially if you’ve given your Bronco a lift. The 2mm thick steel tube supports are topped by 3mm & 5mm thick steel plates with bike pedal-like teeth to provide sure footing when entering or exiting the cab.

Installation is simple, and there are no modifications or drilling required. The steps are finished with a micro-texture black powder coat to flow with the style of the Bronco’s trim, and to prevent rust. These will clear up to 38-inch tires.

***Note: These are designed to fit only the 4-door Bronco, they will not fit the 2-door models.

If you drive tough, rock crawling trails and are looking for the best side body protection available, check out our FS-15 Series Rock Sliders!

We are confident in our products and that they will satisfy your needs, however we realize that there are cases where a product may arrive damaged or defective. Our goal is for our customers to be happy. If you are not satisfied with your purchase of one of our products we will assist you in getting refunded* or exchanged for another product. Our unique grip helps provide sure footing in and out of your Bronco.

No drilling or cutting is required for installation. Designed for all 4-Door Models

No matter what trim level Bronco you own, if it's a 4-door, these will fit.

Everything ships free in the Continental US!
**With the exception of Hard Tops & JL Hoods.

We offer a 1 year limited warranty from the time of purchase.

designed in the usa

All of our parts are CAD designed and tested in the USA to ensure the highest of quality.

All of our products ship within 2 business days. If we happen to be out of stock, a sales associate will contact you directly.

We currently ship only to Canada & US Territories. If you live in a different country, consider using an international courier service.

We accept returns on damaged items with a valid Return Authorization Number or a RMA number. We will refund the full amount minus the shipping costs for the return and a 25% restocking fee.

In the event that your order arrives damaged in any way, please email us as soon as possible (within 24 hours of the receipt of the shipment) at orders@dv8offroad.com with your order number and a photo of the item’s condition. We address these on a case-by-case basis but will try our best to work towards a satisfactory solution.

If you have any further questions, please don't hesitate to contact us at orders@dv8offroad.com.

We ship from our headquarters in Riverside, CA.

DV8 Off Road warrants all parts of its manufacture, furnished under this agreement, to be free from defects in workmanship and material for a period of ONE YEAR from the date of purchase. This limited warranty covers the cost of the product.

Of course we do! In order to receive the discount click here. Replaced factory rock rails on Badlands Sasquatch. Arrived quickly, easy to install! Have the function and aggressive non running board look I was looking for without breaking the bank! 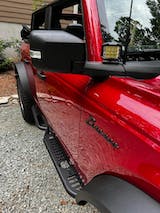 These are very nice! They are solid, well built, and great quality. They were delivered fast and very well packaged.

Love the look and style of my new side steps. My 5 yr old son and I installed these on sunday. Very easy and everything match up perfectly.

Glad to see your boy helped you out. Gotta start them young!

I put a lot of thought into which side steps I chose. DV8 was more pricey than most but ultimately I loved the aggressive look. Gives my Big Bend a more customized look. Installation was a little over an hour. The pieces are heavy so you’ll need someone to hold it up while the first 3 bolts are installed. My teenage girls helped me. Overall highly recommend! Fast shipping too! 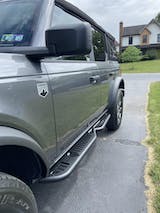 J
JD Weevil
What I was looking for.

I was looking for a step for my wife and some sort of slider help. I spent a lot of time comparing these to the zroads, the GoRhino Raptor style running boards (RB20) and the Go Rhino Dominators D6. I was able to see the raptor board in person and they felt very wide even even though they tuck up next to the bronco. They also give it a bit of an old man feel and not so much of an off-road look and there is also zero type of rail/pipe to the underneath, so an under neath collision I felt would just bend the board. I went back and forth on the D6, but in the end felt the quality didn't look as good as the DV8. and didn't think the under rail was as nice. i felt quality wise the DV8 was on par with the zroads but at a better price. They are very well made, the welding is good, the look is good.. My son and I Installed them in about an hour half- it definitely is easier w/ 2 people, and that includes removing the rock rails that came on my badlands. I had only 1 issue and that is on the back end the top step plate flares up about an 1/8th of an inch on both sides and leaves a little gap between the step and the rail. It is on both sides so I am not sure if it is designed like that or as a result of the plate being riveted down and the pressure flaring it up, but I would have preferred it flat. I don't know if most people would even notice. I will also say it drops about an inch or so below the door frame so if you are looking for a 6 inch drop for someone this isn't it. I wanted a step without sacrificing clearance. It helps some as an entry step, is going to keep mud and rocks from hitting/building up on the door, will be a decent rail for light to medium contact and a good running board to take off the top/ wash it- plus it looks cool. Ordered and received in about a week. I recommend and would purchase from DV8 again. 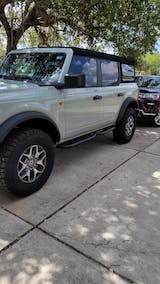